If you live in Italy, then the question “Can pregnant women eat Parmesan cheese” is most likely forbidden.

Well, that’s because you’ll probably come across an angry “nonna” who would give you a bowl out and would tell you that eating parmesan cheese while pregnant is completely safe.

Actually she will tell you it’s mandatory since it is an essential part of most Italian dishes.

However, if you do not reside in this country, then questions like “Can pregnant women eat Parmesan cheese” or “Is parmesan cheese pasteurized” are completely understandable and far from redundant.

That’s precisely one of the reasons why I decided to talk more thoroughly about this topic and give you peace of mind in case you have restless nights (which I highly doubt) because of this delicious cheese.

Let’s see what the experts say!

Can Pregnant Women Eat Parmesan Cheese, or Is It Strictly Prohibited? 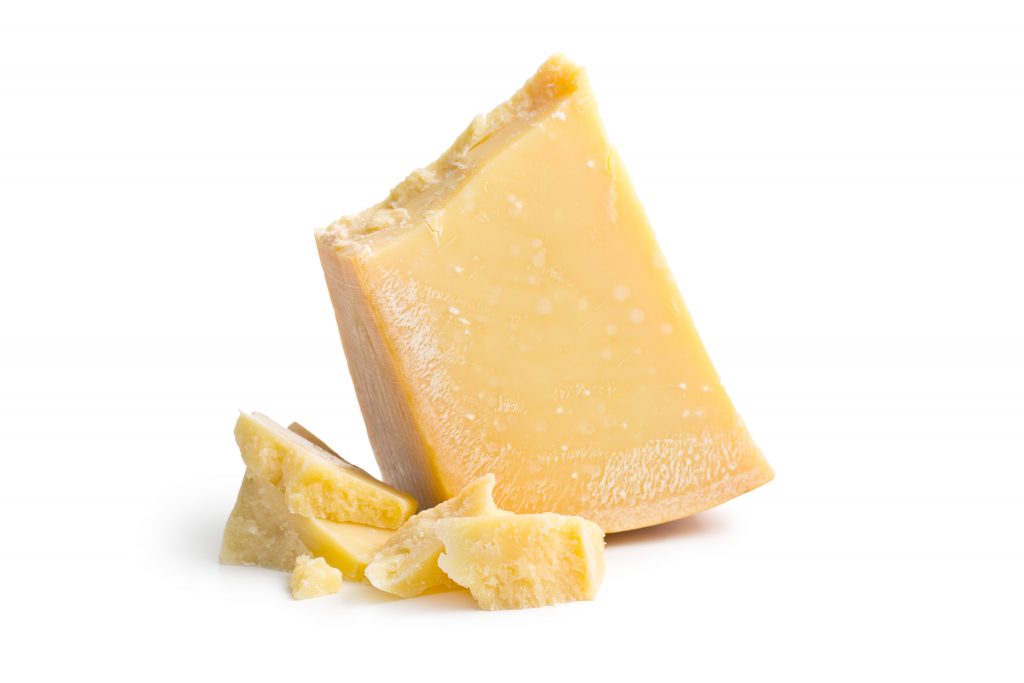 Can pregnant women eat parmesan cheese has got to be one of the most confusing topics for pregnant ladies during this period.

Well, that’s because there’s not a single answer that can be applied to all women. But then, you’ll still stumble upon women who do not have the slightest idea whether they can eat parmesan cheese while pregnant.

One of the most common questions (regarding this topic) is is parmesan cheese pasteurized. And the answer is it can be both, pasteurized and unpasteurized.

And then, does it definitely mean that it’s unsafe to consume parmesan cheese while pregnant? Oh, everything is so confusing, even to me!

Everything You Need To Know About the Fantastic Parmesan Cheese 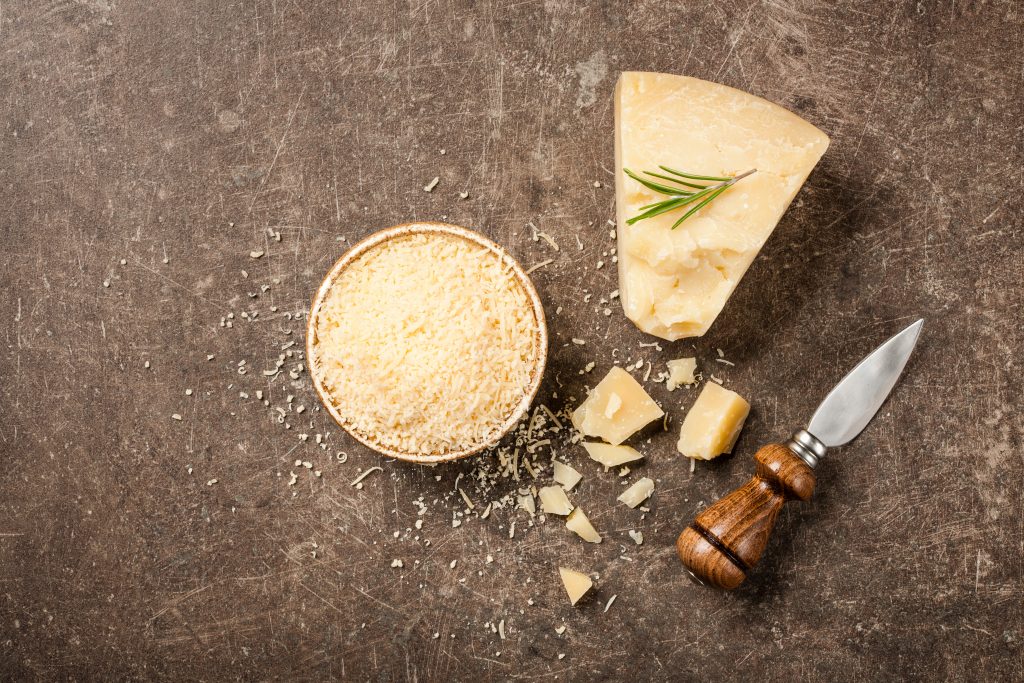 So, let’s dive more into this puzzling “Can women eat parmesan cheese?” topic! So what do we know about this renowned cheese?

Typical Parmigiano Reggiano can be defined as an unpasteurized (to answer your question if the parmesan cheese is pasteurized) hard cheese from one of the most beautiful countries in the world, Italy.

One of its virtues is the fact that it doesn’t contain too much water, which makes parmesan cheese safe while pregnant.

But then, in other countries (that obviously do not follow rigorous Italian rules concerning their favorite cheese), you can run into so-called parmesan that isn’t made the same way as the original one.

So is parmesan cheese pasteurized, then?

As I just stated, there are two types of parmesan cheese out there. The one that’s (unbeatable) original and its copies.

Even though they are not exactly the same, both of these versions are widely known and defined as parmesan cheese.

The original one is also called Parmigiano Reggiano, and if you come across it, you will always see the full name on the package.

In addition, it is made in certain parts of Italy, according to a specific standard and recipe. So can pregnant women eat parmesan cheese (referring to the traditional one)?

What makes it safe?

Well, to put it simply, since it is a hard cheese, aged for at least one year (although it can be even longer), it doesn’t contain too much water, which makes it pretty challenging for various bacteria to survive inside of it. (I’m talking to you, listeria!)

And then we have a different version of parmesan cheese that can oftentimes be found in Europe and the United States that is either called “Reggiano” or simply “parmesan”.

Can pregnant women eat parmesan cheese, that’s popular in these regions? Even though this version can be made with both pasteurized and unpasteurized milk, it is still safe to consume while pregnant, and it’s all due to its hard texture and minimum aging criteria.

Parmesan Cheese vs Listeria – Who Won?

More than thirty years ago, one study was conducted to see whether listeria (a very annoying bacteria) can survive in this cheese.

After a while (as the cheese dried out), listeria counts were so lowered to the point of being unnoticeable after a couple of weeks.

So what can be concluded after this experiment?

As you can see, they can!

And that’s even permitted in the USA, due to the fact that in this country, every unpasteurized milk cheese (such as generic parmesan) has to be aged over two months.

And this just goes to show that our beloved listeria will not be able to thrive in these conditions. Good for her! 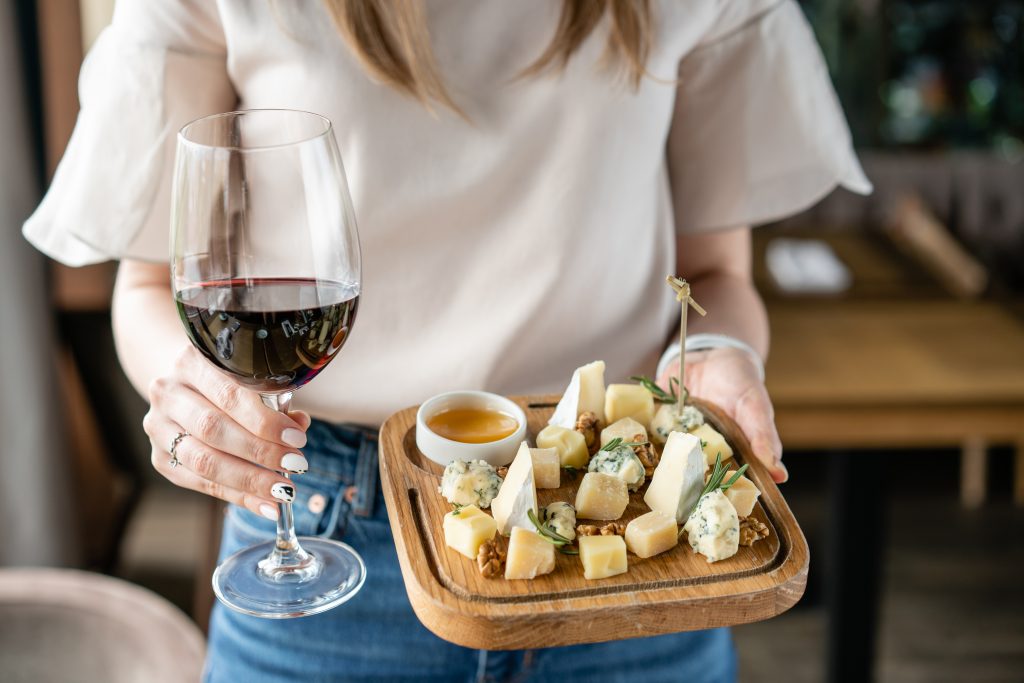 Now that I provided you with some helpful information regarding your question, “can pregnant women eat parmesan cheese?” let’s take a closer look at some of the most significant benefits of eating that cheese.

Not only is this food item delicious and flavorful, but it also offers various medical advantages.

First things first, it is a natural probiotic and has various anti-tumor properties.

Besides that, it is a great source of phosphorus, calcium, and protein, and surprisingly, it can potentially reduce the symptoms of type II diabetes.

A few years ago, two studies decided to thoroughly explore the relationship between osteoporosis and cheese intake in postmenopausal women.

So what happened then?

The first one concluded that women who consumed cheese on a daily basis have decreased odds of suffering from this health condition, which wasn’t the case with the ones who haven’t eaten it as often.

What about the other study?

The other one concluded that if women consumed (on a regular basis) over thirty grams of cheese, they also significantly lowered their chances of having osteoporosis, in comparison to women from Iran. Surprisingly, this conclusion did not apply to Indian women.

In addition, there was another analysis that was published nine years ago that uncovered that consumption of dairy low-fat dairy, fermented cheese, and milk was linked with a reduced risk of stroke.

According to the Dietary Guidelines for Americans (from 2015 to 2020) a healthy dietary regime includes things like cheese, milk, and yogurt.

However, it’s worth mentioning that since a vast majority of cheeses are loaded with saturated fats and sodium, it would be recommendable not to eat vast amounts of cheese.

Instead, opt for low-fat or fat-free dairy products.

Different Sorts of Cheese that Are Safe During Pregnancy 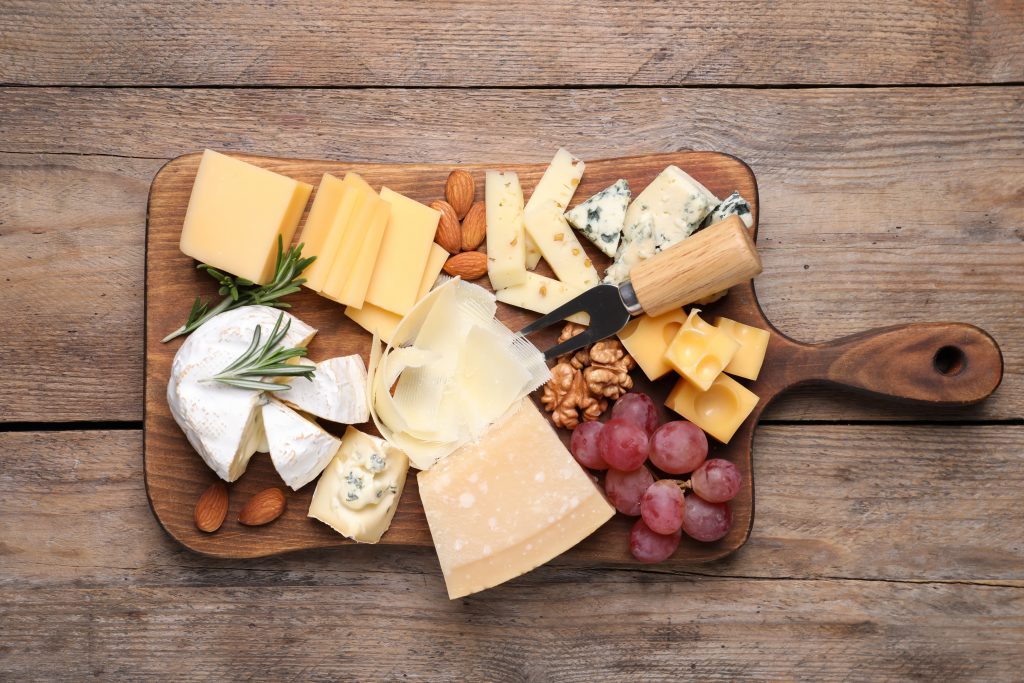 Can pregnant women eat parmesan cheese topic will now be broadened, and I’ll discuss other types of cheese that you’re allowed to eat during pregnancy.

It’s worth noting that there are some types of cheese (such as soft cheese) that you should avoid eating while pregnant if you don’t want to jeopardize the health of your unborn baby.

Well, that’s because some of these cheeses have been associated with foodborne diseases.

And that’s precisely one of the reasons why the FDA joined forces with the Inspection Service of the United States and Food Safety.

They then released a risk assessment that evaluated the risk of Listeriosis among numerous food categories.

Foods that were defined as the riskiest were butter, milk, cream, and unripened cheese (with greater than fifty percent moisture, such as cottage cheese and ricotta cheese).

These are the things that you shouldn’t eat while pregnant.

So what can you eat then?

Can pregnant women eat parmesan cheese only, or are they allowed to consume other sorts of cheese?

I have some great news for you!

Yes, you can! Just don’t forget that the cheese you’ll be eating must be from pasteurized milk. Unpasteurized cheese is not an okay option.

So what is in the “yes you can” list? It includes brie, camembert, mozzarella, feta, blue gorgonzola, cottage cheese, halloumi, goat’s cheese, and many others.

When it comes to soft blue cheese, be sure to eat it cooked, because you don’t wanna risk having any bacteria because it can lead to food poisoning and many other serious complications. 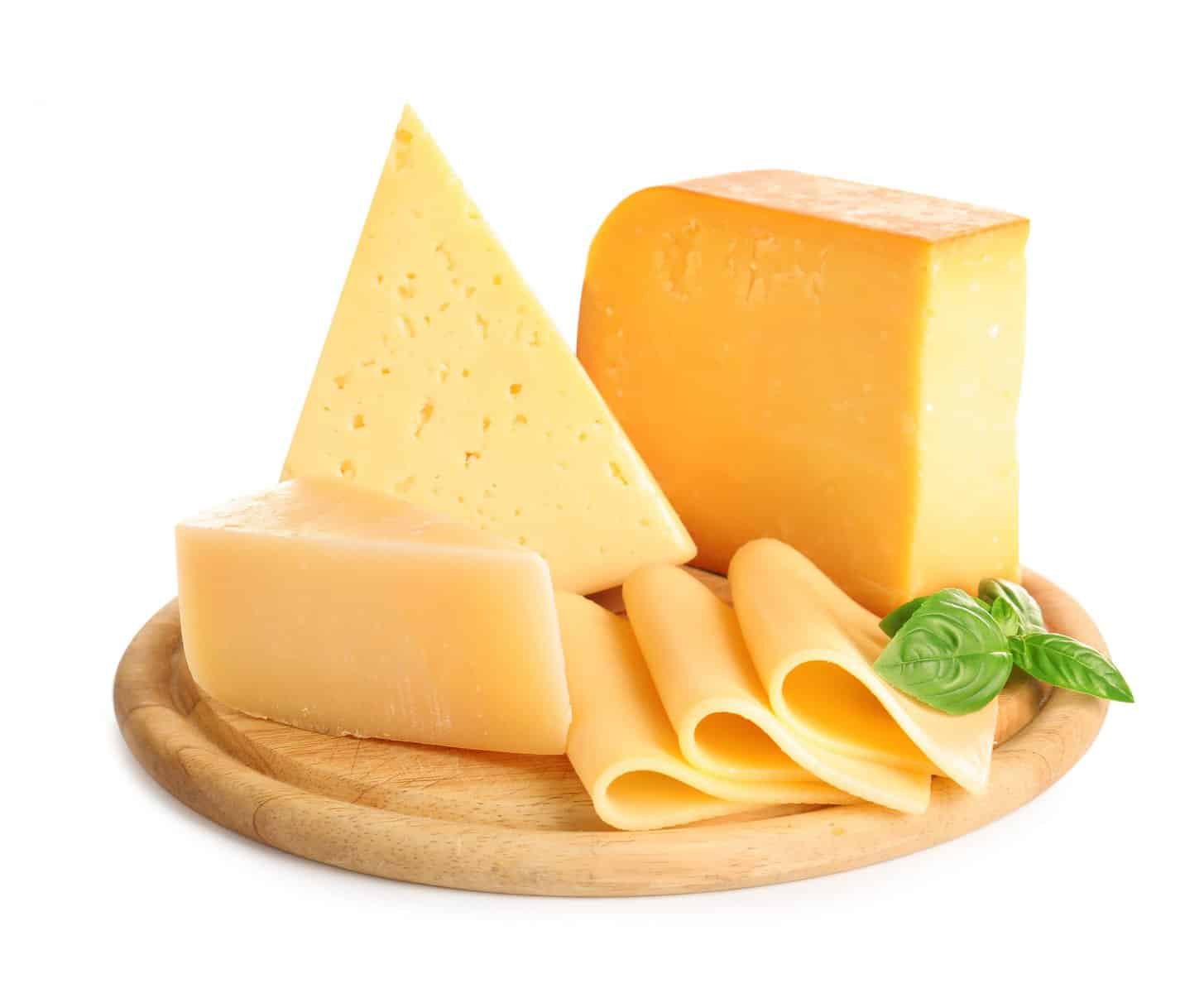 I do not want to focus solely on the question “Can pregnant women eat parmesan cheese” because there are other sorts of hard cheese that are equally appealing to pregnant ladies.

These include stilton and cheddar as well. So since you know that pregnant women can eat parmesan cheese, does it mean they are allowed to eat cheddar and stilton too?

What do you think?

The answer is yes!

Even though both of them were made from unpasteurized milk, just like parmesan cheese they do not contain a lot of water (which I previously mentioned when I was discussing the “Can pregnant women eat parmesan cheese?” topic).

That is why they are considered safe. Bacteria listeria (and other harmful bacteria) doesn’t stand a chance against them!

Namely, a few years ago, the FDA compliance policy guide stated that “Listeria monocytogenes does not grow when the water activity of the food is less than or equal to 0.92”.

That means the safest foods in these instances are hard cheeses, like colby, parmesan and cheddar, sour cream, yogurt, and frozen dairy products.

Does This Refer to Cooked Parmesan As Well?

And you shouldn’t worry about it even if unpasteurized milk has been employed, because of its hard texture and low moisture content.

Can Pregnant Women Eat Parmesan Cheese That Is Aged?

As aforementioned (when we were debating if pregnant women can eat parmesan cheese or not), real parmesan is aged for at least one year and can go all the way up to three years.

So this leads me to conclude (confirmed by the experts) that pregnant women can eat parmesan cheese that’s aged.

And this doesn’t refer to pregnancy only, but it’s generally a much better option in comparison to other sorts of cheese.

Generally speaking, the older it is the less appealing it becomes to notorious listeria. Just keep in mind that the older the cheese is, the stronger its flavor of it is going to be.

Can Pregnant Women Eat Parmesan Cheese if It Has Mold? 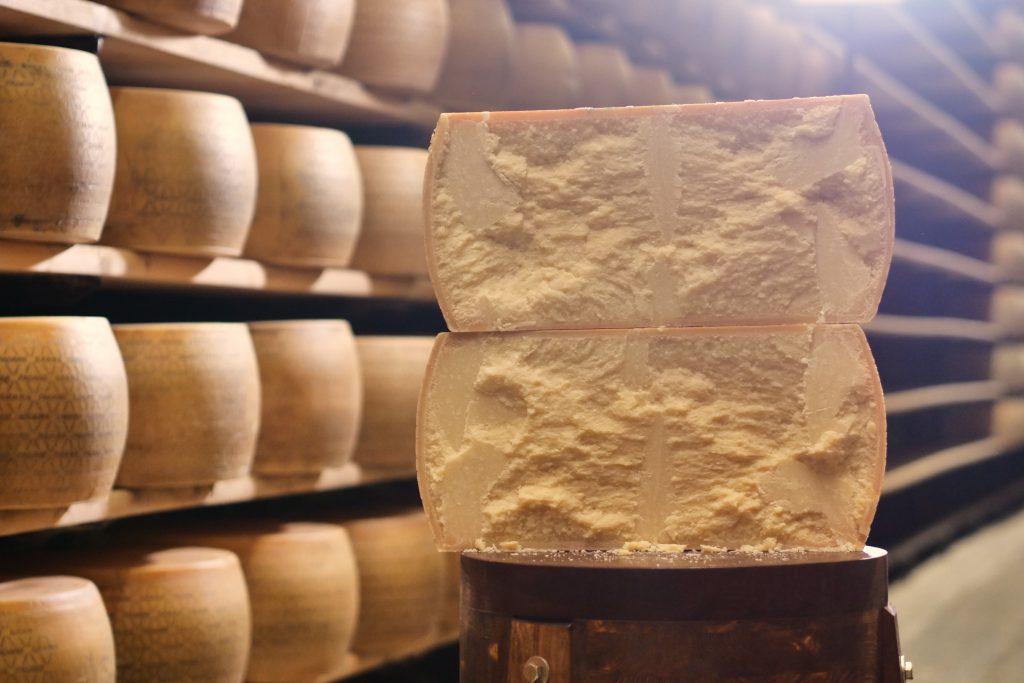 However, that’s not always the case with the generic one. Namely, it may potentially get mold at some point.

Generally speaking, it doesn’t matter whether you are thinking about eating parmesan cheese or any other, the truth is, when it comes to moldy cheese, avoid eating it as much as you can.

That’s particularly important when you’re pregnant because you do not want anything to negatively impact the safety of your baby (and yours too, of course).

Eating cheese that contains mold (this refers even to the smallest amounts of it) can lead to food poisoning.

Now, when I say moldy cheese, I do not talk about blue cheese. Blue cheese has mold that is deliberately added to it, which makes it safe to eat.

Fortunately, since parmesan cheese is very hard, it is highly unlikely that you’ll come across any mold.

However, if by any chance something like this ever happens, the best thing you can do is simply remove the part that contains mold.

If your parmesan cheese craving is not that hard, then it would be even better to stay away from the one that has mold because it can be pretty challenging to determine how deeply it has penetrated the cheese.

“Can pregnant women eat parmesan cheese” could never be complete, if I didn’t mention the brands that you should embrace during pregnancy.

As I previously stated, parmesan cheese is generally safe. However, I would still like to mention the most trustworthy parmesan brands (I want only the best for my pregnant ladies):

1. Any parmesan that comes with a “Parmigiano-Reggiano” label is fine 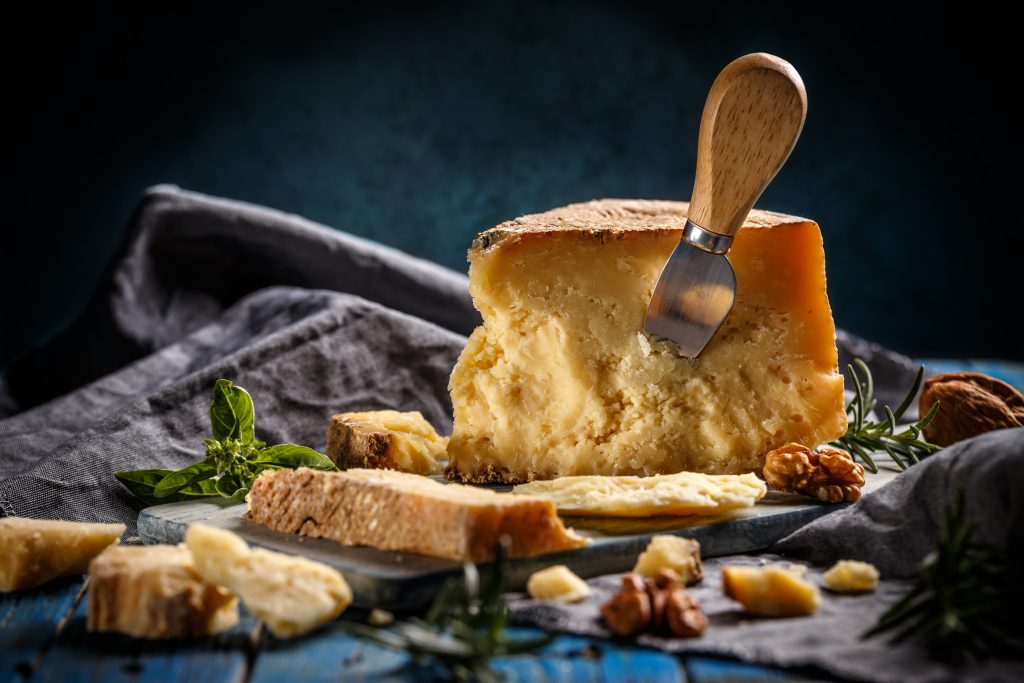 I believe that after reading this “Can pregnant women eat parmesan cheese?” article, the next thing you will do is go to the nearest store and treat yourself to a massive slice of parmesan.

Now that I think of it, I just might do the same!

And who can blame us since now it’s determined that parmesan cheese is safe to eat during pregnancy? 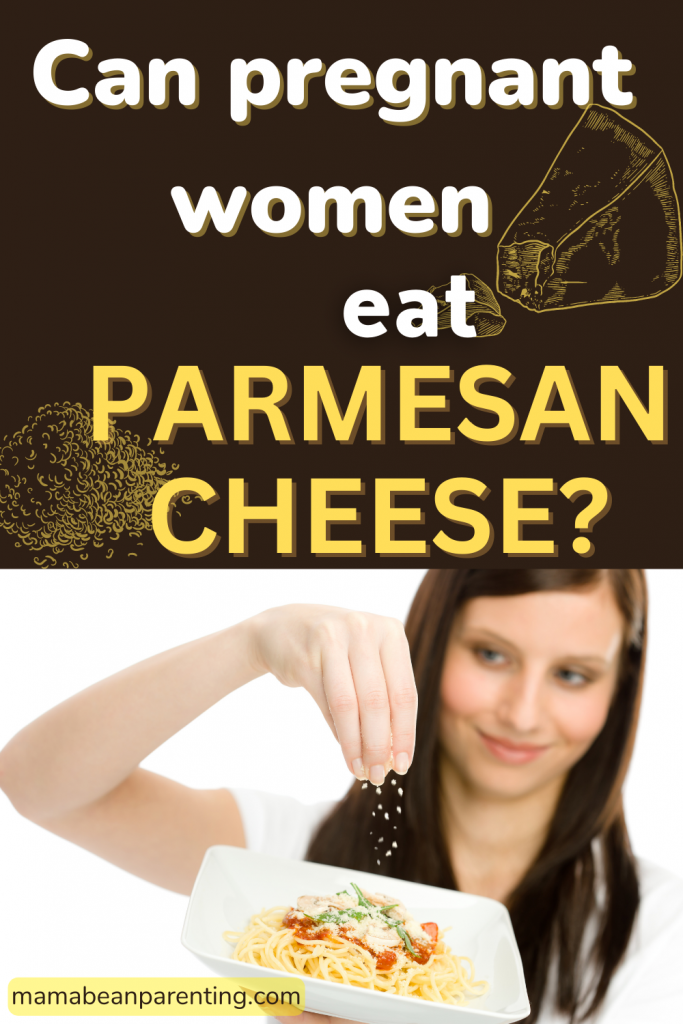