Many pregnant women are familiar with dos and don’t during pregnancy, but what they’re unsure of (regarding the food that’s allowed) is whether they can eat chicken salad while pregnant.

Even though, at first glance, it may appear to be something that’s very healthy, it would still be advisable to run a few checks before a pregnant woman opt for it.

In these instances, you would first have to check the label (just to get yourself familiar with the ingredients) to see whether it contains any potentially harmful ingredients.

Pregnant women should avoid eating chicken salad while pregnant because it could harm an unborn baby.

Now, everything I said above may seem vague to you, so if you want to dive more into this topic (concerning eating chicken salad while pregnant), then let’s do it together! 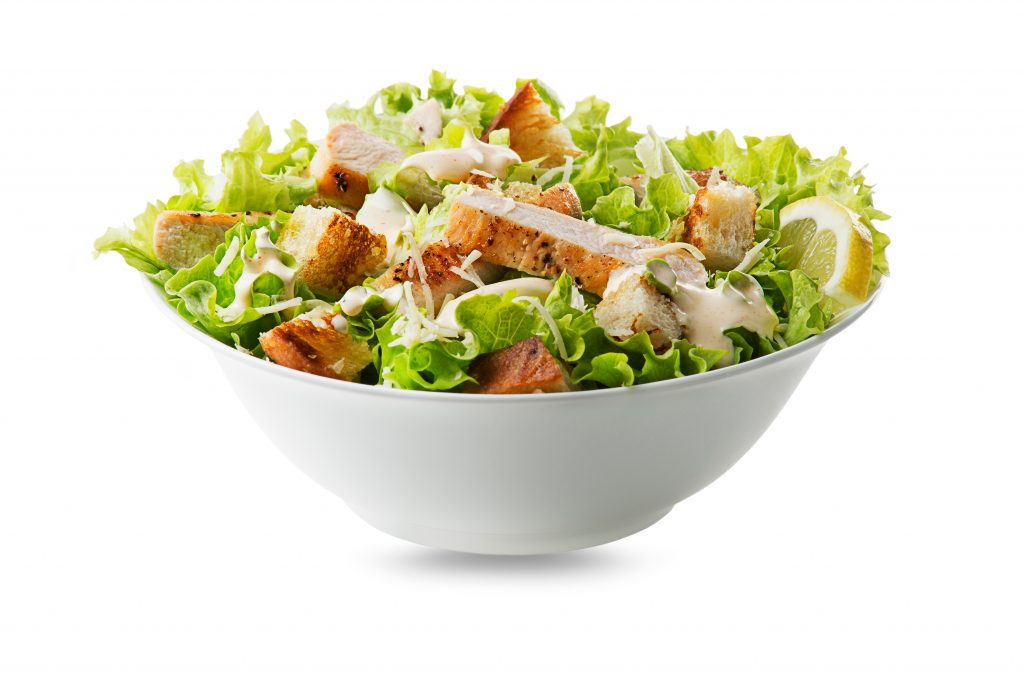 I understand that many pregnant women are convinced that consuming a chicken salad while pregnant cannot harm, however, chicken salad can mean lots of different dishes and variations.

Although chicken salads are generally very popular among people, not all of them are completely safe. But what could potentially be bad about eating chicken salad while pregnant?

As aforementioned, chicken salads are normally very healthy, however, what you need to focus on (regarding eating chicken salad while pregnant) are the ingredients that are utilized during preparation.

Consequently, if you truly want to eat chicken salad while pregnant, then be sure to make it at home because only then you’ll know what goes directly into your bowl.

What Can You Find in a Typical Chicken Salad? 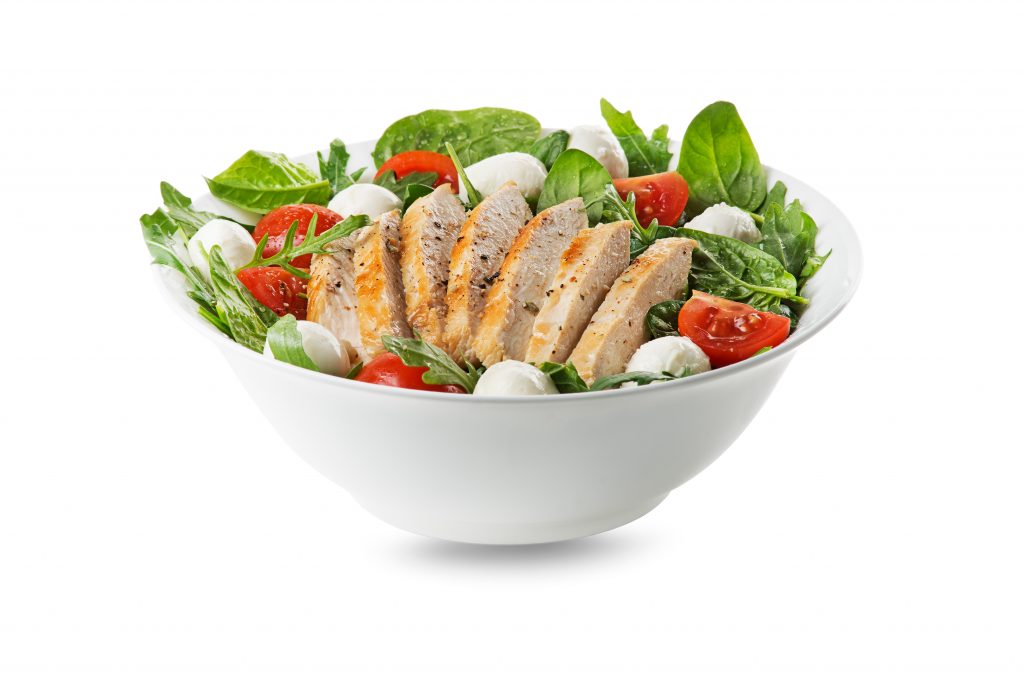 Now that both of us determined that it’s safe to eat chicken salad while pregnant, let’s take a closer look at what this refreshing meal contains.

As previously stated, there are various variations of a chicken salad. Most of them are packed with tomatoes, leafy vegetables, chicken (how shocking), ham, some type of fish (mostly salmon), couscous, and pasta.

Those of you who love to spice things up a little bit, tend to add some mayonnaise, chicken with no raw eggs, and mustard.

And then we have practical RTE (ready-to-eat) salads, that are normally made by an outside manufacturer, or at times (although that’s quite rare) prepared inside the place where it’s sold.

Furthermore, all ingredients are then placed in a plastic bowl and held in chill cabinets of convenience stores, supermarkets, cafes, and many other places where food is served.

However, if you want to be one hundred percent sure that you are eating high-quality chicken salad while pregnant, then you should definitely prepare one at home.

This way, you’ll be able to add all your favorite salad dressings and ingredients to take your chicken salad up a notch!

What Are the Risks of Eating Chicken Salad While Pregnant?

This section refers to those who are still not sure whether chicken salad is safe when you’re pregnant.

Let’s take a look at some reports that were published several years ago that will answer your question regarding eating chicken salad while pregnant.

From 1998 to 2002, over six thousand outbreaks of foodborne illness have been reported by the CDC (Centers for Disease Control and Prevention).

Among those that have been thoroughly examined, it was concluded that bacterial pathogens caused the biggest percentage of outbreaks. Somewhere around 50 percent!

The real culprit that caused these horrific events was Salmonella enteritidis, while Listeria monocytogenes infections were the major cause of death.

Unfortunately, this is not where the story ends. More than two thousand food-borne outbreaks were reported starting from 1992 up until 2006.

According to the reports, four percent of the outbreaks were linked to the consumption of salads.

So what’s the main issue with salads?

Namely, it is widely known that lots of salads are loaded with raw vegetables, along with smoked or cooked ingredients.

And their preparation involves a comprehensive handling process, which leads to a higher risk of exposure to microbial contaminants.

Below, I will go into detail regarding the contamination of salads and how it can potentially occur:

1. Contamination of raw veggies can happen at literally any step of the production chain

2. Any sort of meat (such as chicken or ham) may easily be contaminated after implementing heat treatment during slicing and dicing

3.  If you combine all the ingredients together, this could potentially cause cross-contamination

4. Food items that are high in protein are a great substrate for bacterial growth

The Downside of Chicken 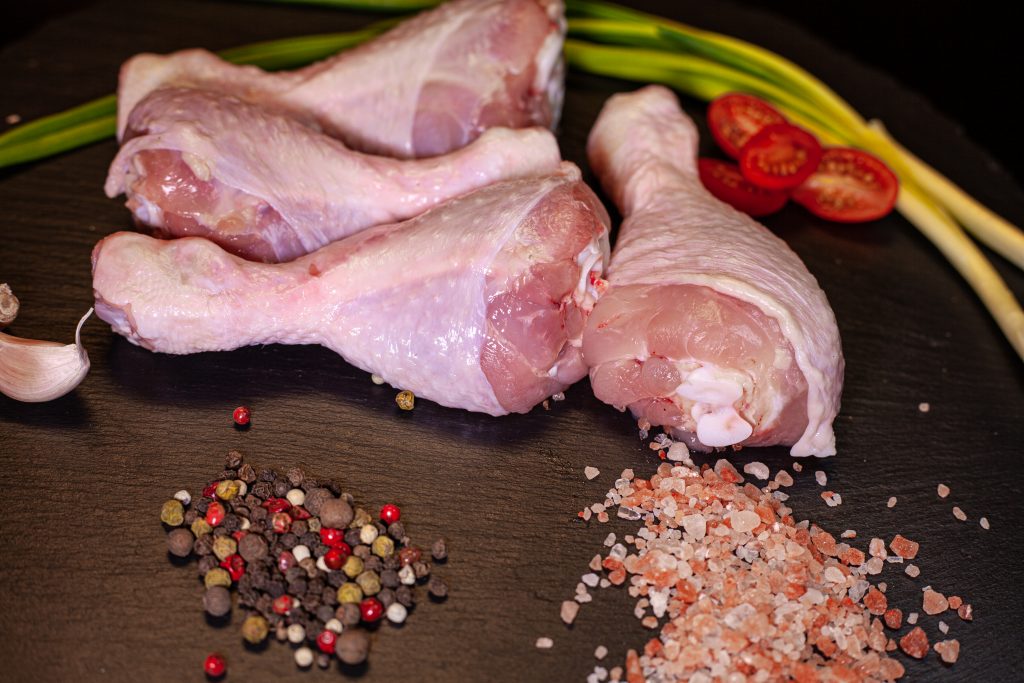 Now, that I scared you enough (regarding eating chicken salad while pregnant), let’s learn some more frightening information about this topic, shall we?

One of the main reasons why many pregnant ladies are wondering is chicken salad safe during pregnancy is because chicken can potentially contain Salmonella.

So what do we know about Salmonella?

It may lead to salmonellosis, which represents an infection that causes numerous symptoms, like fever, diarrhea, and abdominal pain.

In rare situations, it may cause septicemia (which is blood poisoning) that can at times be life-threatening for infants, kids, and older folks.

So if you want to consume chicken salad while pregnant, then you must properly cook the meat.

Sadly, nowadays, no one can guarantee you that the chicken salad you purchased in the store or at a restaurant is made the right way!

Therefore, there’s still a chance you can get sick from eating a chicken salad while pregnant (and even if you aren’t, of course).

If you decide to prepare a chicken salad while pregnant at home, then it would be advisable to employ separate tools for cooking and preparing chicken and other ingredients, like veggies.

Keep in mind that this is one of the best ways to avoid any form of contamination, which is extremely important when eating chicken salad while pregnant!

What About Cold Chicken?

So if you’re still wondering if chicken salad is safe during pregnancy, then below I’ll discuss this topic more.

As a pregnant woman, you should know that it’s completely safe to eat properly-cooked chicken and other sorts of poultry.  Just avoid eating cold-cooked chicken, along with processed chicken meat that can be found in the stores.

It’s good if you’re craving chicken because it’s a great source of protein, which is one of the main reasons you can eat chicken salad while pregnant.

A single serving of protein is provided by 100 grams of lean chicken meat. Just bear in mind that if your meat isn’t properly cooked, it can lead to bacterial contamination (which can potentially cause food poisoning).

That’s not good for you and your unborn baby.

Therefore, it’s best to cook the meat until the thickest part reaches at least 71 degrees Celsius. Only then will you completely destroy bacteria and be able to consume chicken salad while pregnant safely.

It’s worth mentioning that cooled turkey, chicken, and other types of poultry can contain listeria.

A lot of pregnant women eat chicken sandwiches, which is not advisable since they can potentially be contaminated with this bacteria.

Even though it may seem like listeriosis infections are not as serious, don’t forget that they can jeopardize the health of your baby. That’s one of the reasons why a plethora of pregnant women avoid eating cold chicken in general.

Here’s What You Need to Know About Canned Chicken

Can you eat chicken salad while pregnant that contains canned chicken? The good news is, you can!

However, make sure that you eat salad that doesn’t contain undercooked meat and that all salad ingredients are stored and handled correctly.

What’s great about canned chicken in general, is the fact that it’s typically cooked and processed before it’s canned. That is an effective way to eliminate any harmful bacteria.

However, if you still want to eat chicken salad while pregnant, then you should follow all the food safety processes while preparing your salad.

If you’re in the mood to cook it, then below I’ll add some tips that will help you prepare it the right way and avoid any risks:

1. Be sure to wash your hands properly before working with canned chicken

2. Don’t forget to thoroughly investigate the can you’ll be using, just to see if there are any signs of damage, like bulges or dents because these things can indicate that the food that’s inside is either contaminated or rotten

3. I cannot stress enough how crucial it is to check the expiration date. If by any chance, you notice that your can has expired, please throw it away!

4. If you want to get rid of any bacteria, then be sure to cook the canned chicken to an internal temperature of 165°F (at least)

5. Do not eat canned chicken that has an off odor or taste, because this may be a sign that it’s spoiled

Now, if you’re still wondering, “Is chicken salad safe during pregnancy if it contains canned chicken?” the answer is yes. It is, but only if you follow all the previous instructions I wrote.

Generally speaking, it is an excellent source of protein and very healthy. However, it still needs to be handled properly. Pregnant women eat it all the time because it’s both very fulfilling and nutritive. 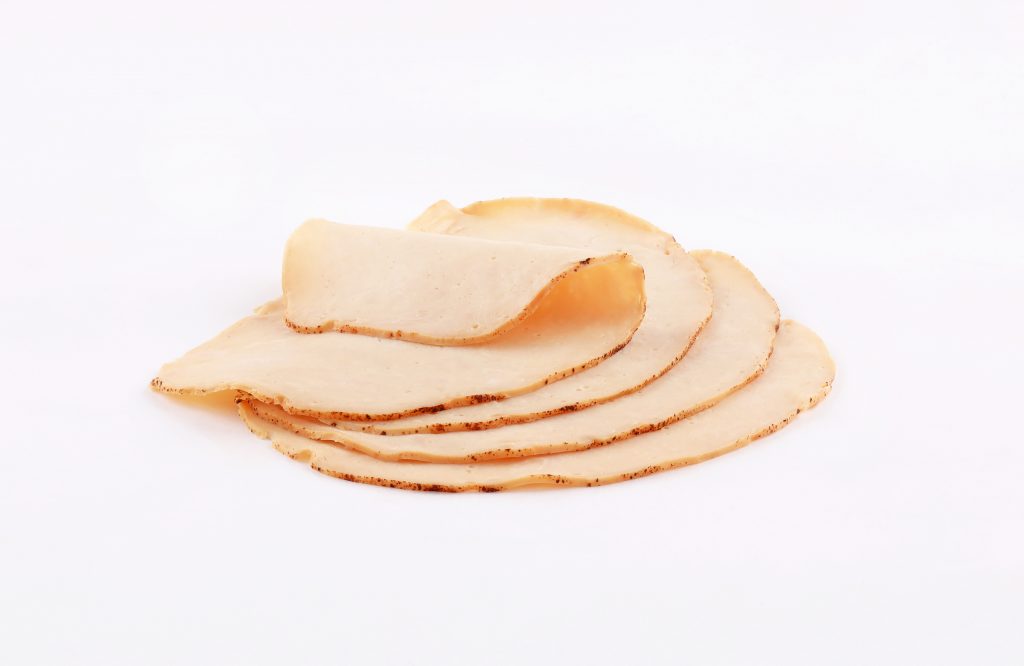 I have to let you know (with tears in my eyes) that it’s not the best idea to eat chicken salad while pregnant that contains deli chicken.

Well, in case you didn’t know, there are various potential health risks that are associated with specific foods.

And then if you’re not cautious enough you may deal with gestational diabetes, high blood pressure, pre-eclampsia, miscarriage, etc.

A food item that can potentially cause some of these issues is precisely chicken deli. It is a sort of poultry that has been processed in a specific way that may leave them with bacteria.

Now, this doesn’t necessarily mean larger amounts, however, you shouldn’t be risking anything while pregnant.

And that’s precisely one of the reasons why you should stay away from this delicious thing. However, if you cannot resist it, then at least make sure to cook it properly, so all the ingredients are thoroughly cooked.

In addition, you should opt for deli chicken that isn’t packed with sodium because that’s another thing that should be avoided during pregnancy.

Furthermore, don’t forget that some ingredients that can be found in a chicken salad may be unsafe as well (this refers to pregnant women) to eat because of their estrogenic effects.

Consequently, it would be best to steer clear of chicken salad that isn’t homemade.

What Are You Going to Do If You Accidentally Ate Deli Meat During Pregnancy?

Even though there are some risks involved when eating deli meat, it won’t be the end of the world if you accidentally eat smaller amounts of it.

However, if you notice that you’re feeling unwell after consuming deli meat and that you are experiencing symptoms like severe diarrhea and stomach pain, then be sure to contact your healthcare provider.

Normally, both of these bacteria are eliminated after cooking and pasteurization, however, it’s always much better to stay away from them because you do not want to risk anything while pregnant. 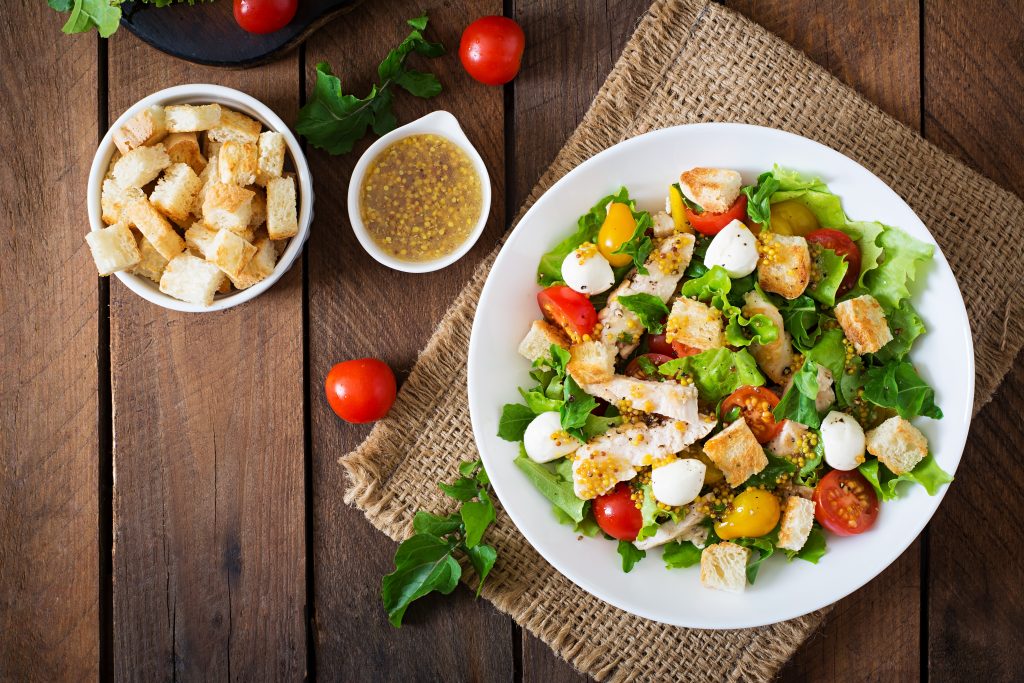 I’d say it is but with a few precautions. Nothing that I wrote here today should be perceived as medical advice, but just as advice from someone who wishes nothing but the best for you. 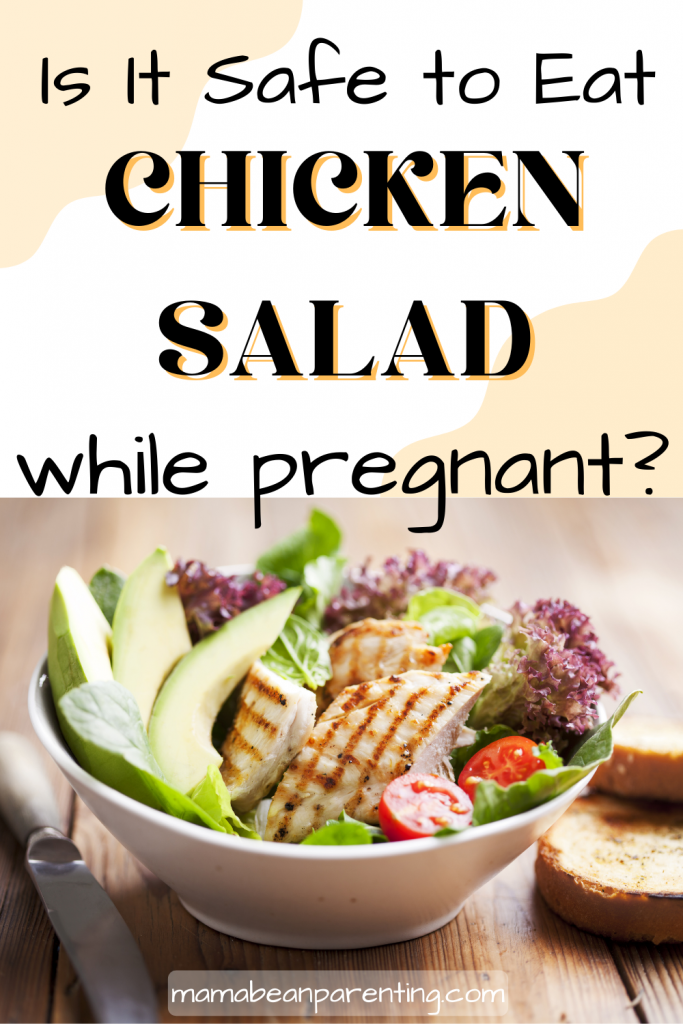